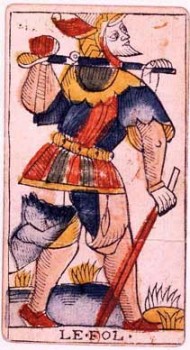 I was chasing the origin of the donkey that plays the harp (he turns up in Romanesque frames of the Heavens/ City of God)  and ran into this character:

I was struck by how much he seems to be referenced in the Thoth deck- sharply contrasting Waite’s very Apollonian Fool.  I went digging back in Uncle Al. No direct mentions (though asses abound) but I feel sure he’s there. The image does look kind of flayed- no eyelids. Full of wind and wine. A variant of Pan/Bacchus associated with freedom of speech. A very Thelemite hero.

And of course the Marseilles fool in his Phrygian cap is depicted with something tearing off his layers- the ambiguity of clothing and skin persists across the early variants. Of course that could just be the stripping of a sacrificial cereal deity, but maybe that cap has asses ears underneath?

Does anyone know if Marsyas has any political significance in modern Italy? I’m also thinking of the Visconti Hanged Man as political rebel/Fool inverted.

If you have an arranged reading skype us at: ficklefingeroffate